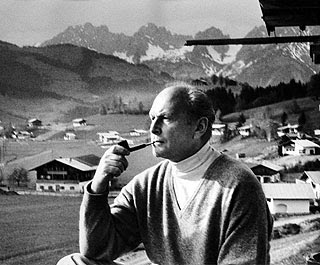 WHEN Heinrich Harrer gazed for the first time on Lhasa, the capital of Tibet, in 1946, he noticed especially the roof-pinnacles of the Potala Palace, gleaming with gold. After 21 months on the run from a British prison camp, having crossed 65 mountain passes and 1,000 miles of territory more than 16,000 feet high, it seemed like a glimpse of Paradise. He had travelled by yak and on foot; he was now verminous and starving, in rags of sheepskin, crippled with sciatica from sleeping on frozen ground, and without a rupee to his name. But gold shone ahead of him.

He little knew that up on that roof, from time to time, a boy of 11 would wander up and down. The youngster had an excellent collection of field glasses and telescopes, and these he would train on the town, watching people. When his subjects—for he was their god, and they his worshippers—realised he was observing them, they would try to remove themselves from his field of vision. But, if only from a distance, the young Dalai Lama would try to catch them. His life otherwise was study and prayer, in dark rooms, with few visitors. The roof was his window on the world.


Tibet at that time was completely closed to foreigners. A foreigner like Mr Harrer—an Austrian mountaineer, fetching up in Lhasa with flowing beard and hair, speaking Tibetan like a peasant—was particularly suspect. But having got there with such effort, he could not bear to leave. Gradually, his life and that of the child-god began to intersect. At religious ceremonies, as the Dalai Lama processed through ecstatic crowds and colonnades of statues made of butter, he would dart sly smiles at Mr Harrer, seeing a figure every bit as exotic as himself.

Mr Harrer, a champion skier and, since his village boyhood, happiest on snow and ice, built a skating rink below the palace. There the Lhasans, delighted and mystified, learned the art of “walking on knives”. The Dalai Lama, who could not see the rink through his telescope, sent a request for a cine-film of the skaters. Then he asked for a cinema. Mr Harrer built him one, running the projector off an old Jeep engine, and discovered at his first proper audience with the living Buddha that the boy had already dismantled and re-assembled it, all by himself.

Over the succeeding months Mr Harrer became his photographer, his teacher and his friend. He taught him maths, geography, science, and what Churchill and Eisenhower had done. As Mr Harrer recorded and slowly understood Tibet, accustoming himself to barley porridge, searing cold and the virtue of stoical patience, the Dalai Lama with avid curiosity pieced the outside world together—until, in 1950, the Chinese invasion of Tibet put an end both to his political innocence and to Mr Harrer's seven-year sojourn there.

They had been, he said later, the happiest years of his life. They had also been unintended. Mr Harrer had gone to Kashmir in 1939 on quite different business, to scout out a “killer mountain” called Nanga Parbat for a possible assault by his team of German and Austrian climbers. He had been arrested instead, on the eve of war.

His purpose in Kashmir had not been entirely unpolitical. He was already a hero in Austria for having made, with three others, the first successful ascent of the infamous north face of the Eiger in 1938. The conquering of the mountain had coincided with Austria's absorption into Nazi Germany, a highly symbolic display of united dominance and strength. Hitler himself had congratulated him. Keyed up by that, Mr Harrer longed to be picked for a Himalayan expedition. To make himself more eligible, he joined the Nazi party and the Styrian SS, and was hired to teach SS officers skiing.

On the White Spider
The Dalai Lama knew nothing of his teacher's past. Mr Harrer did not wish to tell him. He might have told no one, had not the book he wrote of his experiences, “Seven Years in Tibet”, been made in 1997 into a Hollywood epic, with Brad Pitt starring as himself. This drew attention, then investigation. Nothing remotely evil was ever attributed to Mr Harrer; he said he had worn his SS uniform only once, at his wedding.

The witch-hunters ensured that the rest of his life was tainted by this episode. But Mr Harrer's passion was mountains, and it was this passion alone that had ever got him into trouble. The most dangerous moment of his life—the moment after which, he said, he felt privileged to remain alive at all—saw him dangling on the 7,000-foot vertical face of the North Wall of the Eiger, no crampons on his boots, with the surface continually melting in the sun and rocks cascading past him. He was on the White Spider, a network of sheer ice on which nine mountaineers had died not long before. There was no shelter or hiding place; he was continually exposed. And far below, in the meadow from which the mountain rose, a crowd of telescopes was trained on him.

He later said he felt nothing but contempt for those who had observed him, safe and distant, like indifferent gods. He was to feel quite differently about the god, with his long hair and glowing, excited smile, who tried so hard to observe him through his telescope in Lhasa.

This information is worth everyone's attention. Where can I find out more?

Have a look at my weblog ... appliance repair Valrico

After looking over a number of the articles on your web site, I truly appreciate your technique of blogging.
I bookmarked it to my bookmark webpage list
and will be checking back in the near future. Please visit my
website as well and let me know how you feel.