The pictures tell the story

We were not going to return immediately to the "Northeast passage" but the temptation proved too great when we found the photograph shown above. It depicts an SA-15 type multipurpose icebreaking cargo ship of the Norilsk class. Nineteen were built for the Soviet Union between 1982-1987 at Finnish shipyards Wärtsilä and Valmet.

The significance of the picture is that it was taken in 1984 when the 20,000-dwt ship made the first of several shipments of pipes from Japan to the Ob' estuary via the "impossible" Northeast passage. It was following exactly the same route, to exactly the same destination as the much-lauded Beluga Fraternity and Beluga Foresight. Furthermore, the ship made the journey without an icebreaker escort.

From the same source, we also learn that ships plying this route have been visiting Vancouver since 1979.

In 1986 three made homeward passages with grain after the end of the normal navigation season. The last cleared Vancouver on 12 November, and with minimum assistance reached Arkhangelsk on 2 December. Grain shipments from Vancouver to Arctic ports were continuing up to 1992, when the Ivan Bogin cleared Vancouver on 27 August 1992 for Murmansk.

As to European ships making the passage, the Germans have been there before, beating the Beluga fleet by nearly 70 years. This they did with the 3,287-ton converted merchantman Komet.

She left Germany on 3 July 1940 with a crew of 270, sailed up the Norwegian coast and then, with the assistance of the Soviets, navigated the northern route, crossing the Bering Straits into the Pacific Ocean in early September. She returned safely to Germany on 30 November 1941, after sinking seven ships.

During the war US-built lend-lease vessels, including liberty ships handed over to the Soviets, made 120 voyages with cargoes from the American west coast via the Bering Strait to northern ports, following routes similar to that followed by the Beluga fleet. Navigation by Soviet vessels continued after the war but, in the early stages of the Cold War, the route was closed to Western vessels – not by ice but by politics.

The first offer to open the Northern Sea Route to international shipping was made early in 1967, when it was argued that it could save thirteen days between Hamburg and Yokohama as opposed to the conventional link via Suez. To demonstrate the viability of the route, Soviet cargo carriers made three demonstration voyages from north European ports and Japan.

That the project went no further again was nothing to do with ice. In 1967, after the Six Day War, the Suez Canal was closed. The Soviets did not wish to offend friendly Arab governments – and particularly Egypt - by offering an alternative to the Suez Canal and the invitation for international shipping on the NSR was quietly withdrawn.


Twenty years later, the USSR was shifting its economic enterprises to a self-financing system. In 1989 shipments between western Europe and Japan were made in the new generation of SA-15 freighters, one on charter to a German firm.

The following year space was offered to foreign shippers in eight SA-15s trading between Europe and Japan via the Arctic. In 1991 there were fifteen such voyages with 210,000 tons of cargo (one pictured above). That year, the Northern Sea Route was again declared open to foreign shipping.

To test the route, the French Arctic supply vessel "L'Astrolabe" left Le Havre on 27 July 1991 and successfully navigated the NRS, arriving in Japan in early September.

Yet another European vessel followed in her wake. In the summer of 1997, the Finnish-flag tanker Uikku (pictured, below right) sailed the length of the NSR. beginning in Murmansk 3 September, and discharged fuel along a number of Russian Arctic ports. It arrived in Pevek on the 12th to discharge fuel and then sailed through the Bering Strait on 15 September.

After picking up more fuel in the Pacific the ship sailed back along the NSR. discharging fuel at several ports and reaching Murmansk on 14 October. It was reported by the Russian NSR authorities that a Latvian-flag tanker also completed a full transit of the NSR in 1997.

And yet The Independent has the nerve to claim that, "No commercial vessel has ever successfully travelled the North-east Passage," while The Times in an updated version of its story, is still telling us that "the voyage was considered impossible until a few years ago."

As for Niels Stolberg, founder and president of the Beluga Group, when he tells us that, "We are all very proud and delighted to be the first Western shipping company to have successfully transited the legendary Northeast Passage," why is the media taking him seriously? 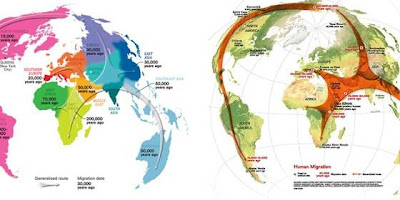 A skull that rewrites the history of man

It has long been agreed that Africa was the sole cradle of human evolution. Then these bones were found in Georgia...

The conventional view of human evolution and how early man colonised the world has been thrown into doubt by a series of stunning palaeontological discoveries suggesting that Africa was not the sole cradle of humankind. Scientists have found a handful of ancient human skulls at an archaeological site two hours from the Georgian capital, Tbilisi, that suggest a Eurasian chapter in the long evolutionary story of man.

The skulls, jawbones and fragments of limb bones suggest that our ancient human ancestors migrated out of Africa far earlier than previously thought and spent a long evolutionary interlude in Eurasia – before moving back into Africa to complete the story of man.

Experts believe fossilised bones unearthed at the medieval village of Dmanisi in the foothills of the Caucuses, and dated to about 1.8 million years ago, are the oldest indisputable remains of humans discovered outside of Africa.

But what has really excited the researchers is the discovery that these early humans (or "hominins") are far more primitive-looking than the Homo erectus humans that were, until now, believed to be the first people to migrate out of Africa about 1 million years ago.

The Dmanisi people had brains that were about 40 per cent smaller than those of Homo erectus and they were much shorter in stature than classical H. erectus skeletons, according to Professor David Lordkipanidze, general director of the Georgia National Museum. "Before our findings, the prevailing view was that humans came out of Africa almost 1 million years ago, that they already had sophisticated stone tools, and that their body anatomy was quite advanced in terms of brain capacity and limb proportions. But what we are finding is quite different," Professor Lordkipanidze said.

"The Dmanisi hominins are the earliest representatives of our own genus – Homo – outside Africa, and they represent the most primitive population of the species Homo erectus to date. They might be ancestral to all later Homo erectus populations, which would suggest a Eurasian origin of Homo erectus."

Speaking at the British Science Festival in Guildford, where he gave the British Council lecture, Professor Lordkipanidze raised the prospect that Homo erectus may have evolved in Eurasia from the more primitive-looking Dmanisi population and then migrated back to Africa to eventually give rise to our own species, Homo sapiens – modern man.

"The question is whether Homo erectus originated in Africa or Eurasia, and if in Eurasia, did we have vice-versa migration? This idea looked very stupid a few years ago, but today it seems not so stupid," he told the festival.

The scientists have discovered a total of five skulls and a solitary jawbone. It is clear that they had relatively small brains, almost a third of the size of modern humans. "They are quite small. Their lower limbs are very human and their upper limbs are still quite archaic and they had very primitive stone tools," Professor Lordkipanidze said. "Their brain capacity is about 600 cubic centimetres. The prevailing view before this discovery was that the humans who first left Africa had a brain size of about 1,000 cubic centimetres."

The only human fossil to predate the Dmanisi specimens are of an archaic species Homo habilis, or "handy man", found only in Africa, which used simple stone tools and lived between about 2.5 million and 1.6 million years ago.

"I'd have to say, if we'd found the Dmanisi fossils 40 years ago, they would have been classified as Homo habilis because of the small brain size. Their brow ridges are not as thick as classical Homo erectus, but their teeth are more H. erectus like," Professor Lordkipanidze said. "All these finds show that the ancestors of these people were much more primitive than we thought. I don't think that we were so lucky as to have found the first travellers out of Africa. Georgia is the cradle of the first Europeans, I would say," he told the meeting.

"What we learnt from the Dmanisi fossils is that they are quite small – between 1.44 metres to 1.5 metres tall. What is interesting is that their lower limbs, their tibia bones, are very human-like so it seems they were very good runners," he said.

He added: "In regards to the question of which came first, enlarged brain size or bipedalism, maybe indirectly this information calls us to think that body anatomy was more important than brain size. While the Dmanisi people were almost modern in their body proportions, and were highly efficient walkers and runners, their arms moved in a different way, and their brains were tiny compared to ours.

"Nevertheless, they were sophisticated tool makers with high social and cognitive skills," he told the science festival, which is run by the British Science Association.

One of the five skulls is of a person who lost all his or her teeth during their lifetime but had still survived for many years despite being completely toothless. This suggests some kind of social organisation based on mutual care, Professor Lordkipanidze said.