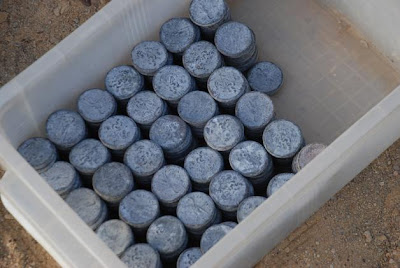 Hoard of Ptolemaic bronze coins, prehistoric jewellery and a Whale discovered at the Fayum Oasis, Egypt
Egyptian Minister of Culture Farouk Hosni announced today the discovery of 383 coins from the Ptolemaic period in the Fayum, or Faiyum, Oasis. Prehistoric jewellery made from ostrich eggs, and a skeleton of a 42-million-year-old whale were also unearthed.
According to the statement released by the SCA (Supreme Council of Antiquities) the coinage, very well preserved and dating to the reign of King Ptolemy III (243 to 222BC), was discovered during routine excavations north of Lake Quarun.

Dr. Zahi Hawass, Secretary General of the SCA, said that the 383 coins are fashioned out of bronze and have a weight of 32 grams each. They are decorated on one side with a scene depicting the god Amon-Zeus (Amon was identified by the Greeks as a form of Zeus), with two horns and a cobra. The other side of the coin is decorated with a falcon standing on a wooden branch. Underneath, 'King Ptolemy' is written in Greek.

Khaled Saad, director of the Prehistoric Department of the SCA, asserted that the ostrich egg necklaces, which date back to the fourth millennium BC, are unique. The technique used to create the jewellery has never been seen before in prehistoric necklaces. Earlier this year, inscribed 60,000-year-old ostrich eggs were found in Blombos Cave in South Africa, revealing that Stone Age man developed ‘symbolic thinking’ much earlier than previously thought.

Even older is the skeleton of a whale unearthed at the site, which dates back 42 million years. These prehistoric items will go on display in the planned site museum.

It's the little changes that produce the biggest changes. Thanks for sharing!