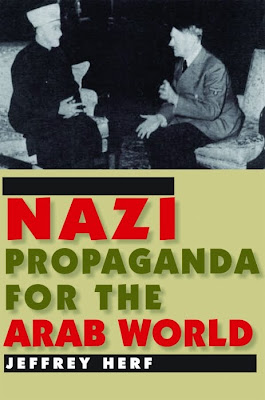 The roots of Islamic fanaticism can be traced to Adolf Hitler's radio messages broadcast around the Arab world during the Second World War, according to a new book.

"Your only hope for rescue is the destruction of the Jews before they destroy you!" Hitler said in a 1942 message, one of thousands broadcast across the Middle East in an attempt to woo the Arab world.

In a broadcast aimed at provoking an anti-Semitic uprising in Egypt, he said: "A large number of Jews who live in Egypt, along with Poles, Greeks, Armenians and Frenchmen, have guns and ammunition.

"Some Jews in Cairo have even asked the British authorities to set up machine guns on the roofs of their houses," he claimed.

But the Nazi's wartime broadcasts had remained a largely hidden chapter in the history of the war until the transmissions were unearthed by a US scholar, who believes they have fuelled continuing unrest in the Middle East.

"The conflict between Israel and the Palestinians would have been over long ago were it not for the uncompromising, religiously inspired hatred of the Jews that was articulated and given assistance by Nazi propagandists and continued after the war by Islamists of various sorts," said Jeffrey Herf, a history professor at the University of Maryland.

In his new book, "Nazi Propaganda for the Arab World", Mr Herf argues that Nazi propagandists offered a message that neatly dovetailed with underlying prejudice.

"Islamic fundamentalism, like European totalitarianism in the 20th century, was and is a mixture of very old and very modern elements.

"It is also a product of a mixture of some indigenous currents in the history of Islam with the hatred of democracy, liberalism and the Jews that were so central to National Socialism.
Mr Herf uncovered 6,000 transmissions, produced under the propaganda minister Josef Goebbels and sent around the Arab world from 1939 to 1945.

The transcripts of the broadcasts were made by the American embassy in Cairo during the war, and classified until 1977 in Washington. But it was not until two years ago that Mr Herf became the first scholar to be given access to the files.

The Nazis relied on radio broadcasts - translated into Arabic - to sow propaganda because of high illiteracy in the Arab world at the time. Although radio ownership was small, it was commonplace for cafes and bazaars to draw large crowds to listen to broadcasts.

Thank you for the auspicious writeup. It in fact was a amusement account it.
Look advanced to far added agreeable from you! However, how can we communicate?