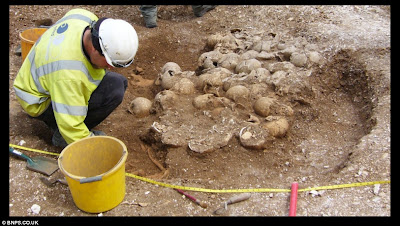 
A 2,000-year-old war grave crammed with up to 50 headless bodies has been uncovered by workers digging a new road for the Olympics.

The Iron Age victims found in the ancient burial site are thought to have been slaughtered by the invading Romans in about AD43.

All of them had been decapitated and some had their limbs hacked off. It has been discovered in the heart of Thomas Hardy country, on Ridgeway Hill near Weymouth, Dorset.

The site is being dug up to make way for a so-called Olympic Highway, an £87million relief road in time for the 2012 games. 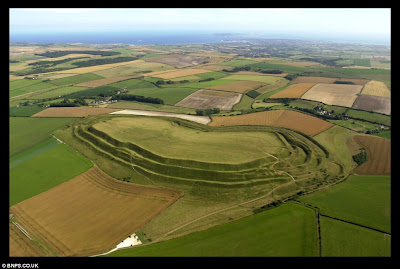 Vespasian led a force south-westwards for Emperor Claudius. His aim was to secure coastal ports and harbours, as well as tin and silver mines in Cornwall and Somerset.

Along the way, he captured 20 hill forts - including Maiden Castle, according to archaeologist Mortimer Wheeler.

The archaeological record shows he got as far as Exeter and probably reached Bodmin.

Mr Wheeler created a vivid story about the fall of Maiden Castle to Roman forces, based on a so-called 'war cemetery' he discovered close to the fort.

He believed a legion wreaked destruction on the site, butchering men, women, and children, before setting fire to the castle.

While there was little archaeological evidence to support this version of events or even that the hill fort was attacked by the Romans, the discovery of the mass grave could change the historical assessment.

Archaeologists are waiting to carry out radio-carbon testing on the newly discovered butchered remains but believe the skeletons could be young local men killed by Roman soldiers.

Dave Score, project manager for Oxford Archaeology which is managing the dig, said it was a 'remarkable and exciting' discovery.

He said: 'We have found a large pit about six metres in diameter. We have counted 45 skulls so far, these are in one section of the pit, and several torsos and leg bones in separate sections of the pit.

'We believe they date from the end of the Iron Age going into the Roman period.

'At the moment we don't fully understand how or why the remains have come to be deposited in the pit. 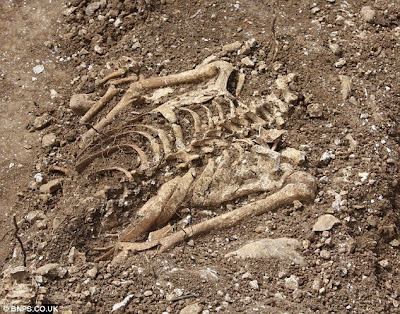 Amazed archaeologists have discovered up to 50 headless corpses nearby
'But it is clear some kind of catastrophic event such as a major conflict or mass execution has taken place and this is a war grave of some kind.

'The heads have been removed and other body parts have been chopped up. We don't yet know if this was before or after death or was some kind of ritual.

'The pit is very close to Maiden Castle, which was a major Iron Age fort. If the victims were Roman we would have expected to find Roman artefacts in the pit, like hobnails from shoes.

'Our gut feeling is that this is the result of a conflict between Iron Age local people and Roman soldiers.'

Mr Score said he and his team were looking forward to carrying out more excavations and tests to find out more about the mass grave.

He said: 'Clearly this is a remarkable and very exciting find. It is exciting in terms of the type of deposit. 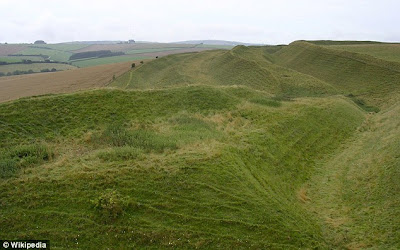 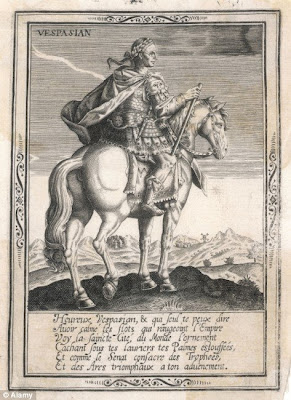 General Vespasian is believed to have attacked Maiden Castle as he marched through the south-western counties of Britain
'It is rare to find a burial site like this one. A pit like that with so many bodies and treated in that way and all piled up in one is very unusual.

'There are lots of different types of burial where skeletons may be aligned along a compass axis or in a crouched position, but to find something like this is just incredible.

'We are still working on carefully recording and recovering all of the skeletons, which will be taken back to our offices in Oxford for detailed analysis, and trying to piece together the extraordinary story behind these remains.'

Andy Ackerman, Dorset County Council's head of highways, said: 'I'd ask members of the public to continue to stay away from the archaeological works.

'The burial pit is within the construction site, which can be a dangerous environment for anyone not trained in site safety.'

The site has been fenced off and is under 24-hour security due to the unique nature of the find, he said.

Archaeological finds from the Weymouth Relief Road project will be put on show at a Dorset museum after they have been analysed and catalogued.

Weymouth and Portland will host all the sailing events at the 2012 Olympics.

Maiden Castle is a hill fort on the site of a Neolithic causewayed enclosure and bank barrow.

After being used for growing crops in about 1,800BC, in the Bronze Age, the hill top was abandoned.

Maiden Castle was built in around 600BC. This early phase was a simple and unremarkable site, covering 16 acres and was similar to many other hill forts.

However, in around 450BC, it underwent major expansion. The enclosed area was nearly tripled in size to 47 acres, making it the largest hill fort in Britain. At the same time, with the addition of further ramparts and ditches, its defences were made more complex.

Towards the end of the 1st millennium BC, the hill fort shrank and settlement became focused at the eastern end of Maiden Castle.

The fort was occupied until at least the Roman period. However after the Roman conquest of Britain in the 1st century AD, the site appears to have been abandoned.

Before this, the Romans may have had a military presence on the site. In the late 4th century AD, a temple and ancillary buildings were built. In the 6th century AD the hill top was abandoned and was used for agriculture in the medieval period.

Although there is a layer of charcoal, it is associated with the iron works, and the main evidence for slighting of defences comes from the collapse of an entranceway to the fort.

A total of 14 bodies in the cemetery exhibited signs of a violent death, but there is no evidence that they died at Maiden Castle.

The eastern part of the hill fort remained in use for at least the first few decades of the Roman occupation, although the duration and nature of habitation is uncertain.

Many 1st-century Roman artefacts have been discovered near the east entrance and in the centre of the hill fort.

At the same time that the castle was abandoned, Durnovaria (Dorchester) rose to prominence as the civitas, or regional capital, of the Durotriges, a Celtic tribe.

Hill fort studies were popularised in the 19th century by Augustus Pitt Rivers. Maiden Castle has inspired composer John Ireland and author Thomas Hardy to write about the place.

In the 1930s, Mr Wheeler undertook the first archaeological excavations at Maiden Castle, raising its profile among the public.

Further excavations were carried out under Niall Sharples, further expanding understanding of the site and repairing damage caused in part by large numbers of visitors to Maiden Castle.

Today, the site is protected as a Scheduled Ancient Monument and is maintained by English Heritage.