For six decades, they held their silence

The group of World War II veterans kept a military code and the decorum of their generation, telling virtually no one of their top-secret work interrogating Nazi prisoners of war at Fort Hunt. 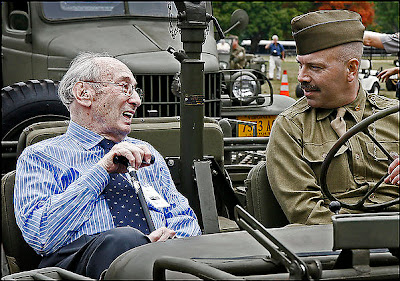 George Frenkel, who interrogated Nazi POWs in World War II, rides with Dave Ostrander at a ceremony honoring the veterans.
(By Bill O'leary -- The Washington Post)

When about two dozen veterans got together yesterday for the first time since the 1940s, many of the proud men lamented the chasm between the way they conducted interrogations during the war and the harsh measures used today in questioning terrorism suspects.

Back then, they and their commanders wrestled with the morality of bugging prisoners' cells with listening devices. They felt bad about censoring letters. They took prisoners out for steak dinners to soften them up. They played games with them.

"We got more information out of a German general with a game of chess or Ping-Pong than they do today, with their torture," said Henry Kolm, 90, an MIT physicist who had been assigned to play chess in Germany with Hitler's deputy, Rudolf Hess.

Blunt criticism of modern enemy interrogations was a common refrain at the ceremonies held beside the Potomac River near Alexandria. Across the river, President Bush defended his administration's methods of detaining and questioning terrorism suspects during an Oval Office appearance.

Several of the veterans, all men in their 80s and 90s, denounced the controversial techniques. And when the time came for them to accept honors from the Army's Freedom Team Salute, one veteran refused, citing his opposition to the war in Iraq and procedures that have been used at Guantanamo Bay in Cuba.

"I feel like the military is using us to say, 'We did spooky stuff then, so it's okay to do it now,' " said Arno Mayer, 81, a professor of European history at Princeton University.

When Peter Weiss, 82, went up to receive his award, he commandeered the microphone and gave his piece.

"I am deeply honored to be here, but I want to make it clear that my presence here is not in support of the current war," said Weiss, chairman of the Lawyers' Committee on Nuclear Policy and a human rights and trademark lawyer in New York City.

The veterans of P.O. Box 1142, a top-secret installation in Fairfax County that went only by its postal code name, were brought back to Fort Hunt by park rangers who are piecing together a portrait of what happened there during the war.

Nearly 4,000 prisoners of war, most of them German scientists and submariners, were brought in for questioning for days, even weeks, before their presence was reported to the Red Cross, a process that did not comply with the Geneva Conventions. Many of the interrogators were refugees from the Third Reich.
"We did it with a certain amount of respect and justice," said John Gunther Dean, 81, who became a career Foreign Service officer and ambassador to Denmark.

The interrogators had standards that remain a source of pride and honor.

Discussion Policy
"During the many interrogations, I never laid hands on anyone," said George Frenkel, 87, of Kensington. "We extracted information in a battle of the wits. I'm proud to say I never compromised my humanity."

Exactly what went on behind the barbed-wire fences of Fort Hunt has been a mystery that has lured amateur historians and curious neighbors for decades.

During the war, nearby residents watched buses with darkened windows roar toward the fort day and night. They couldn't have imagined that groundbreaking secrets in rocketry, microwave technology and submarine tactics were being peeled apart right on the grounds that are now a popular picnic area where moonbounces mushroom every weekend.

When Vincent Santucci arrived at the National Park Service's George Washington Memorial Parkway office as chief ranger four years ago, he asked his cultural resource specialist, Brandon Bies, to do some research so they could post signs throughout the park, explaining its history and giving it a bit more dignity.

That assignment changed dramatically when ranger Dana Dierkes was leading a tour of the park one day and someone told her about a rumored Fort Hunt veteran.

It was Fred Michel, who worked in engineering in Alexandria for 65 years, never telling his neighbors that he once faced off with prisoners and pried wartime secrets from them.

Michel directed them to other vets, and they remembered others.

Bies went from being a ranger researching mountains of topics in stacks of papers to flying across the country, camera and klieg lights in tow, to document the fading memories of veterans.

He, Santucci and others have spent hours trying to sharpen the focus of gauzy memories, coaxing complex details from men who swore on their generation's honor to never speak of the work they did at P.O. Box 1142.

"The National Park Service is committed to telling your story, and now it belongs to the nation," said David Vela, superintendent of the George Washington Memorial Parkway.

There is a deadline. Each day, about 1,100 World War II veterans die, said Jean Davis, spokeswoman for the U.S. Army's Freedom Team Salute program, which recognizes veterans and the parents, spouses and employers who provide support for active-duty soldiers.

By gathering at Fort Hunt yesterday, the quiet men could be saluted for the work they did so long ago.
Publié par Balbino Katz à 08:03