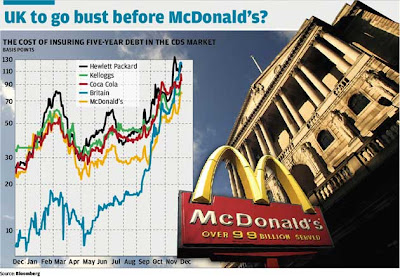 The collapse in Britain's credit rating has taken place over the past two and a half months, since the Government underwrote the banking system and decided to spend its way out of recession. Investing in UK government debt is now almost twice as risky as buying McDonald's corporate bonds, according to the market in credit default swaps (CDS), which provides insurance for the buyers of such debt.

The government debt of large economies such as the UK would normally be considered far more secure than corporate bonds. However, on 29 September, the cost of buying insurance against default on UK five-year government debt became more expensive than the equivalent cover for the US burger chain and has since overtaken Kellogg's and Coca-Cola, according to data from Bloomberg.

The cost of insuring British debt soared on that day, as the Government nationalised Bradford & Bingley, increasing fears that the state would have to bail out the banking system.

The cost of insuring against default on the Government's bonds spiked again in mid-October after the Government announced its unprecedented bailout of the banking system, which has already seen Royal Bank of Scotland become part-nationalised.

The extraordinary movements in the CDS market also reflect market concerns about the highly leveraged British economy, which is sliding into a recession that the International Monetary Fund has predicted may be worse than the slowdown in the US.

The CDS market has proved controversial as the financial crisis has unfolded because it has raised alarm bells about the financial strength of companies, but at the same time it is opaque and illiquid and has become a means for speculators to bet against companies. Investors also use CDS to hedge against other risks such as share prices, meaning prices can reflect other factors than the underlying risk of the debt insured.

But analysts said the dramatic change in the risk rating of the UK's debt still represents a major swing in investor sentiment towards the British economy. The cost of insuring against German default on equivalent terms is below the UK at £51,000, with France costing £61,000. Britain is deemed to be safer than Italy, at £191,000, and Russia, whose CDSs cost £784,000.

Sean Corrigan, the chief investment strategist at Diapason Commodities Management in Switzerland, said: "For the UK to have this default rating is in some ways ludicrous but the market is using these instruments to express a view about the relative standing of certain countries. This has taken off as the domestic financial situation has got worse and the steps taken by the fiscal and monetary authorities have become more irresponsible."

The Bank of England has made an about-turn since September by slashing interest rates three times to 2 per cent, the lowest since 1951, with markets speculating that rates could hit zero as the authorities try to support the economy and ward off deflation. Last month the Chancellor announced that the Government would bring forward spending and cut short-term taxes in a bid to prevent a long, deep recession.

The cash market for debt paints a different picture, with the UK deemed a safer bet than McDonald's and other companies. Analysts said that should in theory attract investors to "arbitrage" the difference between the two markets by betting on the UK in the CDS market. "It looks daft, it is daft, but that is where the buyers and sellers are and the way business is getting done in the CDS market," one analyst said.

What's up to all, it's actually a nice for me to go to
see this web page, it consists of useful Information.

Very nice post. I just stumbled upon your weblog and wished
to say that I have really enjoyed browsing
your blog posts. In any case I'll be subscribing to your feed and I hope you write again very soon!

Hi there mates, good piece of writing and nice urging commented
here, I am in fact enjoying by these.

Pretty great post. I just stumbled upon your weblog and wanted to say that I have really enjoyed browsing
your weblog posts. In any case I will be subscribing for
your feed and I'm hoping you write once more soon!

Feel free to surf to my homepage - Abercrombie

Greetings from Ohio! I'm bored to tears at work so I decided to check out your site on my iphone during lunch break. I enjoy the info you present here and can't wait to take a look when
I get home. I'm surprised at how fast your blog loaded on my mobile .. I'm not even using WIFI, just 3G .

Fantastic site. Plenty of useful information here.
I am sending it to some pals ans also sharing in delicious.
And certainly, thank you on your sweat!

wonderful points altogether, you simply received a new
reader. What could you recommend about your post that you just made
some days ago? Any positive?

Feel free to surf to my homepage; Abercrombie and Fitch

This web site truly has all of the information I wanted concerning this subject and didn't know who to ask.

Feel free to visit my weblog - Get the Facts

I am curious to find out what blog system you happen to
be utilizing? I'm experiencing some small security problems with my latest website and I'd like to find
something more risk-free. Do you have any recommendations?

Hey there this is kind of of off topic but I was
wanting to know if blogs use WYSIWYG editors
or if you have to manually code with HTML. I'm starting a blog soon but have no coding skills so I wanted to get advice from someone with experience. Any help would be enormously appreciated!

It's a pity you don't have a donate button! I'd without a doubt donate to this brilliant blog! I guess for now i'll settle
for bookmarking and adding your RSS feed to my Google account.
I look forward to new updates and will share this website with my Facebook
group. Chat soon!

I feel this is one of the most vital info for me. And i'm satisfied studying your article. However should statement on few common things, The website taste is great, the articles is actually excellent : D. Good activity, cheers

I go to see daily some sites and sites to read articles or reviews,
except this weblog presents quality based articles.

It's hard to find educated people in this particular topic, however, you sound like you know what you're talking about!
Thanks

I've been exploring for a bit for any high quality articles or blog posts on this sort of house . Exploring in Yahoo I ultimately stumbled upon this site. Reading this information So i am happy to express that I've an incredibly
excellent uncanny feeling I discovered just what I needed.

I such a lot indisputably will make sure to do not fail to remember this web site and provides it a look regularly.

I blog quite often and I really appreciate your information.

This great article has truly peaked my interest.
I will bookmark your website and keep checking for new information about once per week.
I subscribed to your RSS feed too.

Please let me know if you're looking for a author for your site. You have some really good articles and I feel I would be a good asset. If you ever want to take some of the load off, I'd absolutely love to write some content for your
blog in exchange for a link back to mine. Please send me an e-mail if interested.
Thanks!

I have read so many articles or reviews regarding the blogger lovers but this post is genuinely a nice piece of writing,
keep it up.

Hi there! Do you know if they make any plugins to assist with Search
Engine Optimization? I'm trying to get my blog to rank for some targeted keywords but I'm not seeing very good success.
If you know of any please share. Cheers!

Great blog! Do you have any tips for aspiring writers?
I'm planning to start my own blog soon but I'm a little lost on everything.
Would you propose starting with a free platform like Wordpress or go for a paid
option? There are so many choices out there that I'm totally overwhelmed .. Any suggestions? Thank you!

I like what you guys tend to be up too. This type of clever work and reporting!
Keep up the excellent works guys I've incorporated you guys to blogroll.

My blog :: Find Out More

Good respond in return of this difficulty with solid arguments
and describing the whole thing concerning that.

You should take part in a contest for one of the greatest sites online.

I am going to highly recommend this blog!

Nice blog right here! Also your website lots up fast!
What host are you the use of? Can I get your affiliate link on your host?
I desire my site loaded up as quickly as yours lol

Take a look at my web-site; Louis Vuitton Purses

you're actually a excellent webmaster. The site loading speed is amazing. It kind of feels that you're doing any unique trick.
In addition, The contents are masterwork. you've done a wonderful job in this matter!

Wonderful goods from you, man. I have understand your stuff previous to and you're just too fantastic. I really like what you have acquired here, really like what you're
saying and the way in which you say it. You make it enjoyable and
you still care for to keep it smart. I can not wait to
read much more from you. This is really a terrific site.

You ought to take part in a contest for one of the finest blogs on the net.
I'm going to highly recommend this web site!

Very nice post. I just stumbled upon your weblog and
wanted to say that I have truly enjoyed surfing around your blog posts.

In any case I'll be subscribing to your rss feed and I hope you write again soon!

Look at my weblog; Find Out More