The flood believed to be behind the Noah’s Ark myth kick-started European agriculture, according to new research by the Universities of Exeter, UK and Wollongong, Australia. Published in the journal Quaternary Science Reviews, the research paper assesses the impact of the collapse of the North American (Laurentide) Ice Sheet, 8000 years ago. The results indicate a catastrophic rise in global sea level led to the flooding of the Black Sea and drove dramatic social change across Europe. The research team argues that, in the face of rising sea levels driven by contemporary climate change, we can learn important lessons from the past.

The collapse of the Laurentide Ice Sheet released a deluge of water that increased global sea levels by up to 1.4 metres and caused the largest North Atlantic freshwater pulse of the last 100,000 years. Before this time, a ridge across the Bosporus Strait dammed the Mediterranean and kept the Black Sea as a freshwater lake. With the rise in sea level, the Bosporus Strait was breached, flooding the Black Sea. This event is now widely believed to be behind the various folk myths that led to the biblical Noah’s Ark story. Archaeological records show that around this time there was a sudden expansion of farming and pottery production across Europe, marking the end of the Mesolithic hunter-gatherer era and the start of the Neolithic. The link between rising sea levels and such massive social change has previously been unclear. 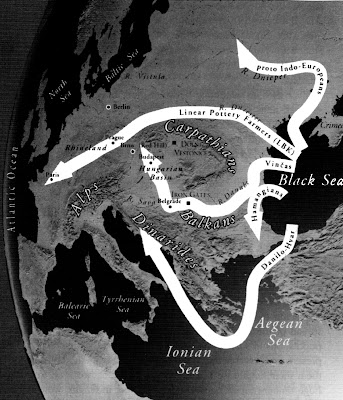 The researchers created reconstructions of the Mediterranean and Black Sea shoreline before and after the rise in sea levels. They estimated that nearly 73,000 square km of land was lost to the sea over a period of 34 years. Based on our knowledge of historical population levels, this could have led to the displacement of 145,000 people. Archaeological evidence shows that communities in southeast Europe were already practising early farming techniques and pottery production before the Flood. With the catastrophic rise in water levels it appears they moved west, taking their culture into areas inhabited by hunter-gatherer communities.

Professor Chris Turney of the University of Exeter, lead author of the paper, said: “People living in what is now southeast Europe must have felt as though the whole world had flooded. This could well have been the origin of the Noah’s Ark story. Entire coastal communities must have been displaced, forcing people to migrate in their thousands. As these agricultural communities moved west, they would have taken farming with them across Europe. It was a revolutionary time.”

The rise in global sea levels 8000 years ago is in-line with current estimates for the end of the 21st century. Professor Chris Turney continued: “This research shows how rising sea levels can cause massive social change. 8,000 years on, are we any better placed to deal with rising sea levels" The latest estimates suggest that by AD 2050, millions of people will be displaced each year by rising sea levels. For those people living in coastal communities, the omen isn’t good.”