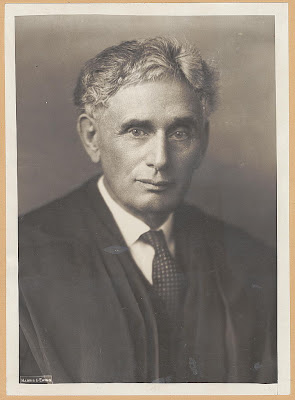 Some 80 years ago, "Big Mose" Barnett, a notorious Minneapolis gangland chief, sent his crew to shake down a dry cleaner by the name of Samuel Shapiro. When Shapiro refused to pay, Barnett's thugs sprayed down his customers' clothes with acid.

Modern stereotypes notwithstanding, Jewish gangs were no joke in the 1920s. And they weren't above rubbing out nosey journalists. None of the local newspapers would touch the Shapiro story -- except one: a weekly rag called the Saturday Press, published by a certain Jay M. Near. That lone tabloid made a difference. When Near wrote a scathing article about Shapiro's plight, embarrassed prosecutors moved against Barnett's men.

Unfortunately, apart from being a fearless scourge of the underworld, Near was also quite the politically incorrect hothead. One of his Saturday Press articles, for instance, declared that "practically every vendor of vile hooch, every owner of a moonshine still, every snake-faced gangster and exbryonic yegg in the Twin Cities is a Jew." (Don't ask me what a yegg is, let alone an "exbryonic" one. I have no idea.)

In 1927, the courts shut the Saturday Press down under Minnesota's Public Nuisance Law, which banned any newspaper that was "malicious, scandalous and defamatory." Near appealed the judgment, and took the case all the way to the U.S. Supreme Court. His victory created a landmark in First Amendment jurisprudence, and paved the way for the ultra-free press Americans now enjoy.

Did Near win because the high court was packed with anti-Semites? Just the opposite. As former New York Times columnist Anthony Lewis notes in a new book, Freedom for the Thought We Hate, a crucial swing vote in the Court's 5-4 majority was that of Louis Brandeis. As someone old enough to remember Ulysses Grant's mass-expulsion of the Jews from conquered Union territories during the Civil War, Brandeis had more than a passing knowledge of anti-Semitism. Yet he was also a principled legal scholar who understood the value of a free press. It speaks volumes about America's constitutional tradition that a man such as Jay M. Near would be un-muzzled by the first Jew who ever sat on the U.S. Supreme Court.

Here in Canada, things have followed a different route. Crucially, the most important hate-speech precedents in this country arose after the Holocaust, at a time when suppressing hatred was taken to be a more important goal than protecting freedom.

The creation of human-rights tribunals and Canada's hate-speech law -- Section 319 of the criminal code -- were both cheered by the Jewish legal and activist establishment. In the seminal 1990 case of R. v. Keegstra, which upheld the validity of Section 319, the intervenors included not only Canadian Jewish Congress and B'nai Brith, but also InterAmicus, a think tank then headed by renowned international-law expert (and future federal justice minister) Irwin Cotler. (Read the Supreme Court's Keegstra judgment and you will find chunks lifted straight from the InterAmicus brief.)

Over time, the prosecution of anti-Semites such as Ernst Zundel, James Keegstra, Malcolm Ross and Doug Collins created a legal template for Canada's hate-speech jurisprudence. It created a moral template as well: Censorship advocates justified their speech codes by appealing to the horrors of the Holocaust. To oppose hate-speech laws, many human-rights types argue to this day, is to give comfort to fans of Mein Kampf.

It goes without saying that the battle against anti-Semitism is an important one. And those who've made it their life's calling deserve our respect. That said, it is clear that Canadian Jews put their chips down on the wrong side of the hate-speech issue. On a purely gut level, it may seem comforting to have laws on the books that gag society's bigots. But, as is always the case with ideologically motivated censorship, the long-run cost exceeds the benefit.

That cost includes the crippling of debate that inevitably arises when you declare any point of view -- no matter how odious -- be off limits. As the recent human-rights cases against MacLean's and the Western Standard show, there will always be complainants and commissars willing to expand the definition of prohibited speech to encompass legitimate discourse. Ironically, the censorship regime that well-meaning Jewish intellectuals helped put in place to fight anti-Semitism a generation ago is now being applied to prosecute the pundits blowing the whistle on the one truly genuine threat that Jews are facing worldwide: militant Islam. Thin-skinned types may find Levant and Mark Steyn over the top. But then, lots of people said the same thing about Near. Whether the threat is shariah or shakedowns, the marketplace of ideas needs its fearless mavericks. Just ask Samuel Shapiro. Better yet, ask Irshad Manji, Salim Mansur, Ujjal Dosanjh, Tarek Fatah, or any of the other identity-politics dissidents who've been labeled "malicious, scandalous and defamatory" by members of their own communities.

As far as Canadian Jews are concerned, there is another less obvious cost to putting the community's moral authority behind institutionalized censorship: It cements a collective self-identity based around victimhood. The message is: "We are so vulnerable, so incapable of arguing down the brain-dead lunatics who attack us with words, that we need state censors to act as our shield."

Though criminal prosecutions against anti-Semites are actually quite rare, the few that arise encourage the conceit of a community besieged by murderous hatred. This conceit, though useful in creating a shared sense of community solidarity, has served to distract Canadian Jews from the happy fact that anti-Semitism is completely extinct in our society's respectable mainstream. Canada is probably as close to a post-anti-Semitic society as has ever existed in any nation in Western history --including modern-day Israel. But you wouldn't know it from the lachrymose doom-speak emanating from the acronymed Jewish activist establishment.

That is one of the many reasons why the stakes are so high in the fight to reform human-rights law in this country. The ongoing sniping match between Levant and the Jewish establishment is essentially a proxy battle in a larger struggle for the political soul of the Jewish community. It is a fight between those Jews who support free speech, and those who support censorship; between those focused on the new threat of militant Islam, and those still worried about neo-Nazi kooks; between those who want Jews to take a vocal leadership role in the defining ideological battle of our time, and those who see themselves as passive victims who require protection from a nanny state.

I know what side I'm on. But yeggs like me and Ezra can take this battle only so far. What we really need to lead this movement is a Canadian Brandeis. Mr. Cotler, what do you say?