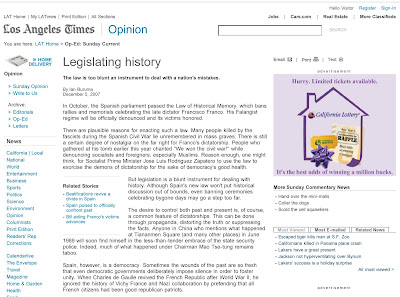 The law is too blunt an instrument to deal with a nation's mistakes.
By Ian Buruma

In October, the Spanish parliament passed the Law of Historical Memory, which bans rallies and memorials celebrating the late dictator Francisco Franco. His Falangist regime will be officially denounced and its victims honored.

There are plausible reasons for enacting such a law. Many people killed by the fascists during the Spanish Civil War lie unremembered in mass graves. There is still a certain degree of nostalgia on the far right for Franco's dictatorship. People who gathered at his tomb earlier this year chanted "We won the civil war!" while denouncing socialists and foreigners, especially Muslims. Reason enough, one might think, for Socialist Prime Minister Jose Luis Rodriguez Zapatero to use the law to exorcise the demons of dictatorship for the sake of democracy's good health.

But legislation is a blunt instrument for dealing with history. Although Spain's new law won't put historical discussion out of bounds, even banning ceremonies celebrating bygone days may go a step too far.

The desire to control both past and present is, of course, a common feature of dictatorships. This can be done through propaganda, distorting the truth or suppressing the facts. Anyone in China who mentions what happened at Tiananmen Square (and many other places) in June 1989 will soon find himself in the less-than-tender embrace of the state security police. Indeed, much of what happened under Chairman Mao Tse-tung remains taboo.

Spain, however, is a democracy. Sometimes the wounds of the past are so fresh that even democratic governments deliberately impose silence in order to foster unity. When Charles de Gaulle revived the French Republic after World War II, he ignored the history of Vichy France and Nazi collaboration by pretending that all French citizens had been good republican patriots.

More truthful accounts, such as Marcel Ophuls' magisterial documentary, "The Sorrow and the Pity," were, to say the least, unwelcome. Ophuls' 1968 film was not shown on French state television until 1981. After Franco's death in 1975, Spain too treated its recent history with remarkable discretion.

But memory won't be denied. A new generation in France, born after the war, broke the public silence with a torrent of books and films on French collaboration in the Holocaust as well as the Vichy regime, sometimes in an almost inquisitorial spirit. The French historian Henri Russo dubbed this new attitude the "Vichy syndrome."

Spain seems to be going through a similar process. Children of Franco's victims are making up for their parents' silence. Suddenly, the civil war is everywhere: in books, television shows, movies, academic seminars and now in the legislature.

This is not just a European phenomenon. Nor is it a sign of creeping authoritarianism. On the contrary, it often comes with more democracy. When South Korea was ruled by military strongmen, Korean collaboration with Japanese colonial rule in the first half of the 20th century was not discussed -- partly because some of those strongmen, notably the late Park Chung-hee, had been collaborators themselves. Now, under President Roh Moo-hyun, a new "truth and reconciliation" law has not only stimulated a thorough airing of historical grievances but has led to a hunt for past collaborators.

Lists have been drawn up of people who played a significant role in the Japanese colonial regime, ranging from university professors to police chiefs -- and extending even to their children, reflecting the Confucian belief that families are responsible for the behavior of their individual members. The fact that many family members, including Park's daughter, Geun-hye, support the conservative opposition party is surely no coincidence.

Opening up the past to public scrutiny is part of maintaining an open society. But when governments do it, history can easily become a weapon to be used against political opponents -- and thus be as damaging as banning historical inquiries. This is a good reason for leaving historical debates to writers, journalists, filmmakers and historians.

Government intervention is justified only in a very limited sense. Many countries enact legislation to stop people from inciting others to commit violent acts, though some go further. For example, Nazi ideology and symbols are banned in Germany and Austria, and Holocaust denial is a crime in 13 countries, including France, Poland and Belgium. Last year, the French Parliament introduced a bill to proscribe denial of the Armenian genocide too.

Even if extreme caution is sometimes understandable, it may not be wise, as a matter of general principle, to ban abhorrent or simply cranky views of the past. Banning opinions, no matter how perverse, has the effect of elevating their proponents into dissidents. Last month, British writer David Irving, who was jailed in Austria for Holocaust denial, had the bizarre distinction of defending free speech in a debate at the Oxford Union.

Although the Spanish Civil War was not on a par with the Holocaust, even bitter history leaves room for interpretation. Truth can be found only if people are free to pursue it. Many brave people have risked -- or lost -- their lives in defense of this freedom.

It is right for a democracy to repudiate a dictatorship, and the new Spanish law is cautiously drafted. But it is better to leave people free to express even unsavory political sympathies because legal bans don't foster free thinking, they impede them.