He pumps the hand of a tour guide he knows and, on discovering the tourists are from Ireland, he recommends that they visit the Calle O’Reilly, named for an Irish-born general in the Spanish Army who revamped the city’s defenses in 1763 and married a Cuban heiress. 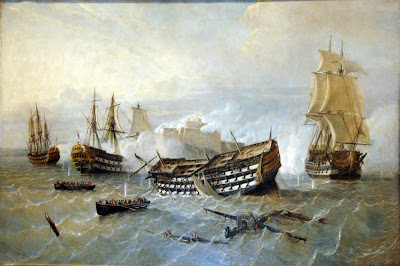 La défense de la Havane en 1763 contre la Royal Navy.
“Ladies and gentlemen, there goes the man most responsible for the restoration of the buildings you see here,” the guide tells his flock.

It is not an exaggeration. Over the past 40 years, Mr. Leal, the official historian of Havana, has pulled off a most unusual feat. While much of Cuba’s infrastructure has crumbled and its economy has limped along, he has rebuilt and refurbished more than 300 landmark buildings in Old Havana, from fortresses built in the colonial days to famous nightspots and hotels of the city’s swinging era just before the Cuban revolution.

The center of the city was once a dark warren of cobblestone streets, worn facades and decaying ruins. Now it has some streets that rival Prague or Paris for cleanliness and beauty. Tourists throng the Plaza del Catedral, with its 259-year-old cathedral, and wander up Calle Obispo, a street lined with luxury shops, to the Floridita, the plush bar where Hemingway drank mojitos and daiquiris.

“There were years when not everyone believed in this,” Mr. Leal said, as he walked up Calle Obispo and shook hands with well-wishers. “Years when there was a lot of work, a lot of difficulties, but now it’s easier, because now you can see all the people, how they support you, they give you a smile, some happiness, and this makes it possible to continue at least for a little while longer.” 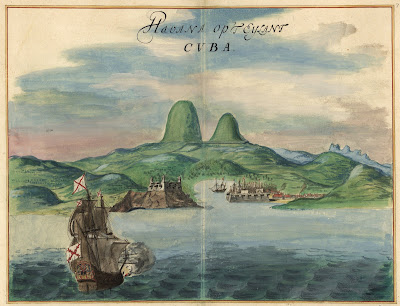 La ville au XVIIe siècle.
Yet the renovation has only gone so far, and tens of thousands of people are still trapped in squalid buildings just blocks from the refurbished zones, giving rise to grumbling among some residents that the renovation amounts to a Potemkin village for visitors. They point out that few Cubans can afford the $7 drinks at the Floridita, and by law Cubans cannot stay in the restored hotels, even if they could afford the rates of $150 a night.

“The reconstruction doesn’t have anything to do with the state system we live in,” said Yadira Amoros, a 30-year-old single mother who was using a plumber’s wrench to try to get water flowing to her dingy apartment a block from Calle Obispo. “None of this benefits us.”

Mr. Leal says the key to the renaissance of the old city has been a strategy of restoring old hotels, restaurants and historic sites to attract tourists, then using the revenue from tourism to finance more restoration.

In the 1990s, after the Soviet Union collapsed and Cuba lost billions in subsidies, Fidel Castro gave Mr. Leal’s office extraordinary powers to collect taxes and reap the profits of tourism in the old center, through a state-owned company called Habaguanex. Mr. Leal has plowed the profits back into the construction work, not only for hotels, but for schools and residences as well.

“It’s a law to try to save the patrimony rather than sell it, in the moment when the country was in a very profound crisis and all of us were looking for a way to eat, a way to get to work,” he said.

As a result, the Spanish town founded in 1519 around a deep harbor has come back to life, along with a treasure trove of buildings in the baroque and neoClassical styles. The 300 renovated buildings represent about a third of the structures in the 1.5-square-mile center marked by the old city walls. The United Nations has praised Mr. Leal’s development model and named the zone a World Heritage Site.

Among the hotels are the Ambos Mundos, where Hemingway used to write in a corner room, and the Santa Isabel, a small colonial inn favored by former President Jimmy Carter and Jack Nicholson. 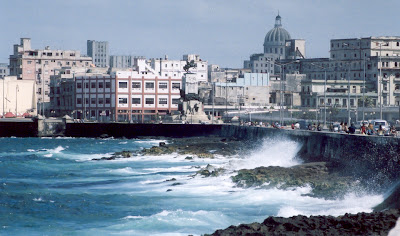 More than 220 buildings are being refurbished. One project under way is the restoration of Sloppy Joe’s Bar and the hotel above, once a fixture in downtown Havana for journalists, writers, artists and other hangers-on among the intelligentsia.

Just a half block from the Bodeguita del Medio, another famous eatery favored by Hemingway that is constantly mobbed with tourists, Cubans troop into a sparsely stocked government store to get their monthly rations of beans, powdered milk, cigarettes and soap.

Yeisi Rodriguez, a nurse who grew up in the neighborhood, said the renovations had certainly improved the atmosphere. Yet she was still living in a partitioned area of her father’s apartment with her husband and a 3-year-old toddler. Together they get by on state rations and about $20 in salary. She said she could not afford to shop at the stores along Calle Obispo where the tourists go.

“Where the shops are, it is much more beautiful than it used to be,” she said. “But I cannot buy there. It’s difficult. They are always fixing something, but what are we going to do with this amount of money?”

Mr. Leal is acutely aware that much of the population has yet to benefit from the renovation. “It pains me to see every day the border that divides what has been restored and what remains to be restored, and every day it is more urgent and harder, and it pains me a lot that many people still cannot receive any benefit,” he said. 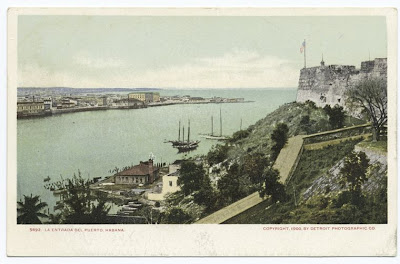 Le port au début du XXe siècle.
One reason for the continued poverty is that the workers in the hotels, museums, restaurants and hotels reap little of the tourist money. All receive a state salary of $10 to $20 a month in Cuban pesos plus a bonus of $12 in hard currency, but most of the profits from the businesses go to the renovation efforts.

Those workers are the lucky ones. Others hold down jobs and receive a salary only in Cuban pesos. Even with subsidized food and free health care and education, Cubans complain that they cannot make ends meet and that they must resort to selling stolen goods or running confidence schemes aimed at tourists.

“Everyone has to do something,” said one man, who ran a state-owned grocery store for a $12 salary. “I sell cigars.”